New book "With the River on Our Face" forthcoming Fall 2016

I haven't posted on this blog in quite some time, but would like to share the good news that my next poetry collection With the River on Our Face will be published this fall 2016 by the University of Arizona Press. In the coming months, I will post a link to my website with further information.
Posted by Emmy at 6:35 PM 2 comments:

New and Expanded Edition of SOLSTICE 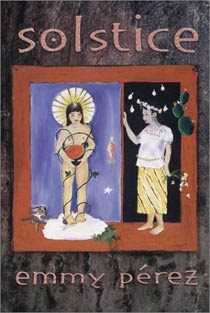 "At last, a New Expanded edition of Solstice! The first edition of this title is out of print. The second edition is now for sale, and includes some poems translated into Spanish [by José Antonio Rodríguez and Jeannie Moody], as well as additional poetry not in the first edition. Solstice has been one of our bestsellers, and we are pleased to make it available again.”

"Emmy Pérez's poems are elegantly political, never polemical. They discover the beauty in revolution without romanticizing its hardships. From the first moment I encountered her poems, I knew I was meeting a singular voice -- one that can find lyricism in struggle, dignity in injustice. Her voice sings of landscape and longing with deftness of image and diction. What a welcome debut."

"The new generation of Latina poets will be noted for the work of writers such as Emmy Pérez."

Here's a RATTLE e-Review of the first edition.
Posted by Emmy at 5:15 PM 1 comment: 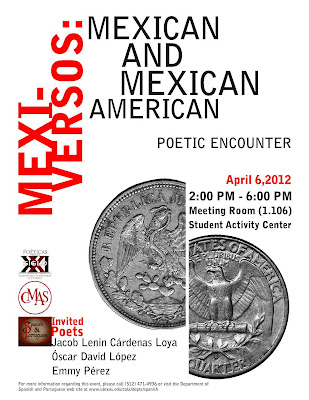 Based in the Department of Spanish and Portuguese at The University of Texas at Austin, this initiative aims to bring to campus contemporary poets on an annual basis. The event consists of a one-afternoon poetry reading by and conversation with a number guest poets. This year the event is a collaboration between the Department of Spanish and Portuguese and the Center for Mexican American Studies (CMAS).

All events take place in Meeting Room 1.106 of the Student Activity Center (SAC) at The University of Texas at Austin.

Sponsored by the Department of Spanish and Portuguese and the Center for Mexican American Studies (CMAS).

Co-sponsored by the Teresa Lozano Long Institute for Latin American Studies (LLILAS); the Department of English; the Mexican Center at LLILAS; and the Graduate School at The University of Texas at Austin.

Jacob Lenin Cárdenas Loya is a poet and artist, born in Ciudad Juárez in 1989. He wrote his first Rap poems while living in the city of Chihuahua in 2004. Since he came back to Ciudad Juárez, in 2008, he has produced several songs, based on his Rap lyrics. Cárdenas Loyola is a Rap poet who links his writings and his songs to the experience of social violence in his native Ciudad Juárez as well as the reality of living on the US-Mexico border. His first record Historias del Mictlán was produced in 2010 by Estrago Records, it is a collection of rap songs in memoriam of his brother Otoniel, murdered in Cd. Juáres in 2009. Jacob has been an active participant in the present juvenile movement of hip-hop, one of the most important cultural expressions addressing the current turmoil of the drugs war in this city.

Emmy Pérez is a poet and creative writing teacher, originally from Santa Ana, California. She is the author of a collection of poems, Solstice (Swan Scythe Press, 2003; 2nd ed. 2011). She holds degrees from Columbia University and the University of Southern California. She has lived on the US-Mexico border, from El Paso to the Rio Grande Valley, for over a decade. She has taught writing workshops in juvenile and adult detention centers, and currently, she is an Assistant Professor of English at The University of Texas-Pan American. Poet Emmy Pérez has received poetry fellowships from the New York Foundation for the Arts and the Fine Arts Work Center in Provincetown. In 2009, she received the Alfredo Cisneros del Moral Foundation Award. Her work has appeared in Prairie Schooner, North American Review, Notre Dame Review, New York Quarterly, Borderlands: Texas Poetry Review, A Broken Thing: Poets on the Line (University of Iowa Press, 2011), The Wind Shifts: New Latino Poetry (University of Arizona Press, 2007), and other publications. Currently, she is a CantoMundo Poetry Fellow, a member of the Macondo Writers' Workshop, and a contributing editor for Texas Books in Review and The Writer's Chronicle.
--
Posted by Emmy at 11:54 AM No comments:

A Broken Thing: Poets on the Line

A Broken Thing: Poets on the Line, edited by Emily Rosko and Anton Vander Zee, University of Iowa Press, 2011 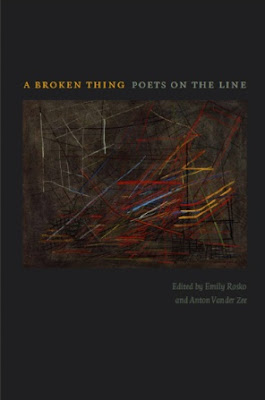 To read the introduction from the anthology, click here

“Whether oral or written, ancient or modern, from one hemisphere or another, most poetry has organized itself in basic units that English calls lines. In their energetic collection of brief essay-sprints, Emily Rosko and Anton Vander Zee offer us nearly seventy contemporary writers’ thoughts about poetic lines. The result is a rich and glorious variety of insights and formulations, lavishly inclusive and resolutely uncommitted to any single orthodoxy. The editors’ forthright introduction is illuminating, judicious, and open-handed. This is a book that anyone drawn to the study of poetic form and its largest meanings should know.”—Stephen Cushman, author, Riffraff, and editor, Princeton Encyclopedia of Poetry and Poetics

“A Broken Thing is a lovely, useful, and well-conceived book. From the introduction’s astute and informative discussions of the historical embeddedness of tussles over the poetic line in poetry to the essays thereafter, readers and writers will be made aware that there is, as Rosko and Vander Zee note, no consensus, an awareness that can be vital for a young poet. A Broken Thing gathers the arguments and exchanges of the day. It does not offer essays that correct or offer definitive approaches to the line; on the contrary, it gathers the hubbub of voices that any critical approach would need to take into account.”—Lisa Steinman, author, Made in America, Masters of Repetition, and Invitation to Poetry and coeditor, Hubbub

“Negotiating segmentivities (a.k.a. line and sentence) defines poetry as a mode of practice. This energetic anthology examines the line from many poetic formations, assumptions, incarnations, platforms, and positions; it faces multiple debates with panache and frankness. The range and élan of the contributors present a strikingly pragmatic sense of contemporary poetics.”—Rachel Blau DuPlessis, author, Blue Studios and Drafts

"Synopsis: Set in 1989 San Antonio and the present, this adaptation of George Bizet’s classic opera dives deep into the themes of passion and envy in portraying the lives and struggles of the marginalized and working classes of South Texas. “Carmen de la Calle” highlights the hybridity of Tex-Mex culture by incorporating the melodrama of novellas (Mexican soap operas), spoken word, bilingualism, and the musical confluence of Mexican standards, modern Tejano, Hip-Hop and the music of 1989 pop culture.

The story begins in present day with Mercedes, who sits behind her bar and tells us the tragic story of her friend, Carmen. With the musical help of her DJ nephew and the house band, Mercedes guides the audience through a flashback of her youth in San Antonio.

Through a series of musical performances and spoken word narration, audiences will be swept up in the lives of Carmen, a gorgeous and tenacious
femme fatale factory worker and Queen of the Theo Avenue Gs, her lover Joe, a straight laced all-American Military Police officer who grew up in the Valley, and neighborhood homies like Frasquita, a female emcee with big hair, big earrings and big attitude, and Don Cairo, Carmen’s macho equal, aspiring rapper, and leader of the Theo Avenue Gs.

With live musical accompaniment provided by members of the San Antonio musical group, Los Nahuatlatos, and original dance choreography, this groundbreaking New Musical by Amalia Ortiz will engage audiences like no other.

Emmy
SOLSTICE (poems) and With the River on Our Face (forthcoming fall 2016). I was born and raised in Cali. After some time in NYC and Navajo country moved to la frontera by choice, by love, by the words of antepasados (literal and literary). Former New York Foundation for the Arts and Fine Arts Work Center in Provincetown poetry fellow. MFA Columbia. Alfredo Cisneros Del Moral Foundation Award, 2009. Macondo Writers' Workshop Member. CantoMundo Fellow.